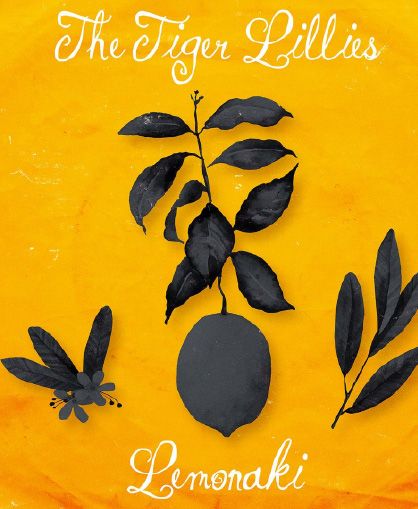 We hope that people can make a donation to the band for watching the show.
When their concert on 1 October at The Herodion, Athens was cancelled due to new health restrictions,
Martyn Jacques and Adrian Stout decided to perform a livestream show from the Tiki Bar,
Athens so that fans can hear the songs they would have played that night.

The songs are from the band’s new album ‘Lemonaki’, which is available now exclusively from Bandcamp.
So, on Friday 9th October The Tiger Lillies are releasing the concert on YouTube and they hope you can donate something if you watch the show.
The 16 songs are mostly adapted from Greek Rebetiko music of the 1920’s and 30’s, stories that confront the outcasts of Greek society; pickpockets, drunks, refuges, fallen women, the lonely and friendless night denizens. Sad but defiant people who survive on the edge of society, stories as relevant today as they were 100 years ago.

There are also 2 new interpretations of the classic songs ‘St James Infirmary’ and ‘Somewhere Over the Rainbow’ which tie into the album’s themes of loss and hope. When life gives you lemons, make Lemonaki! Please support the Tiger Lillies during these uncertain and challenging times by donating to watch the online show and by purchasing the album.
https://PayPal.me/TigerLillies111
https://thetigerlillies.bandcamp.com
It’s never been more vital to support the arts and artists however you can, and if we have a hope of returning to live performance in the future it is only through your generous support now.