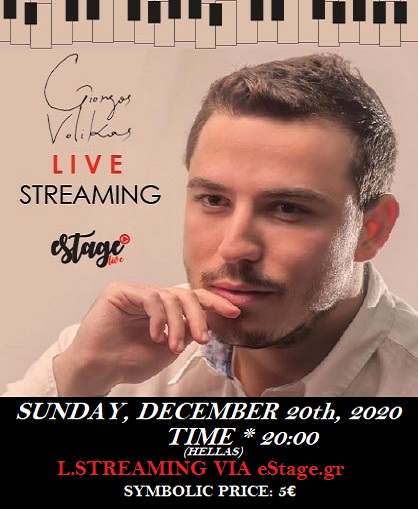 The music composer Giorgos Volikas, invites you on Sunday, December 20th, 2020 at 20:00 (Hellas Time) in a live streaming concert, where he will present his compositions, live on the piano.

The live streaming will be transmitted via eStage.gr
Duration: 1h
Price: 5€

Using this link, you can watch a video from G.Volikas’ performance in Megaron – The Athens Concert Hall: https://www.youtube.com/watch?v=lDpy6xJ6Alg

A few words about G.Volikas:

Giorgos Volikas was born in Athens on September 25, 1991 and he is a Hellene music composer.

His first personal album “Genesis”, which includes ten of his own instrumental compositions, has been released in Hellas, as well as abroad.

The melody and the piano have a leading role in his music!

His compositions have been broadcasted by television and radio stations in Europe, America and Australia. From time to time, the newspapers: “The National Herald” in New York, “The Kosmos” in Sidney, “The Montreal Greek Times” in Montreal and “China Greece Times” (Hellenic-Chinese newspaper), have mentioned his artistic work.

He has presented his compositions in Megaron-The Athens Concert Hall, in the festival “Manos Xatdjidakis” in Xanthi, in “Aegean Arts International Festival” in Crete, in Poros Arts Festival, while he has also composed music for the Official Advertising Campaign of the Association “The Good Samaritan-of the Abused Woman and Child” and theatrical performances.

His composition “Genesis” has framed part of the television show “Me Areti kai Tolmi” (with Virtue and Boldness) on the Hellenic Broadcasting Corporation (ERT 1), directed by Tasos Birsim.

*The music composer himself is the sole owner of the copyright of all the compositions that will be presented in this live streaming.